All dates have been postponed/canceled due to the ongoing pandemic. Mary and I deeply appreciate your interest and support of our music, and attending venues of our live performances. We hope and pray that you and your loved ones will be SAFE AND HEALTHY in the times ahead!

Thanks for visiting our new website. We hope you like the changes and invite you to click around to get to know our story and listen to our music. We would love to have you attend one of our upcoming live performances. To see if there is a performance scheduled near you just click on the "SHOW DATES" button above. -
Thanks! Mary & Bob 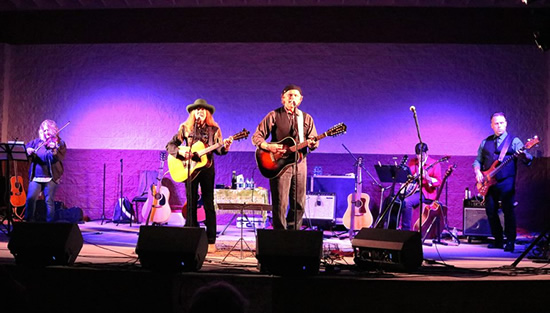 Mary Bomar and Bob Ritter met in Nashville, Tennessee and for more than 25 years have been performing their brand of contemporary folk /pop music. Drawing on diverse influences such as Joni Mitchell, Dan Fogelberg, Bonnie Raitt, Bob Seger, Ray Charles and the Eagles (to name a few!), they are known for their tight harmony, intricate guitar arrangements and light hearted stage manner.

Veterans of the stage, they have performed at: the nationally known Bluebird Café in Nashville, Tennessee; Kentucky Homefront Radio Show, Kentucky Music Weekend and The Crescent Hill Art and Music Festival in Louisville, Kentucky; the (former) Ohio River Valley Folk Festival in Madison, Indiana; the Metamora Old Time Music Festival in Metamora, Indiana; The Hedgehog Music Showcase in Arcadia, Indiana; the historic Pixy Theatre in Edinburgh, Indiana, and a wide variety of other venues throughout the South, East and Midwest.

They are also among a group of tribute artists who honor the life and musical legacy of folk/rock musician Dan Fogelberg, in their shows and yearly celebrations in Dan’s hometown of Peoria, Illinois. In addition they hope to raise awareness of prostate cancer, which took Dan far too soon…

Their debut CD release, The First Step, is an acoustic based collection of thought provoking songs, which has had broad appeal to audiences of all ages. Their long awaited second CD, Take The Road, was released in June 2013 and carries a little more of a rock edge. They have opened shows for or have shared billing with country music star Billy Dean, former Statler Brother and Country Music Hall of Famer, Jimmy Fortune, acclaimed folk artist Kate Campbell, bluegrass legends Eddie and Martha Adcock, Grand Ole Opry performer Jim Smoak, Grammy Award winning gospel group, The Blackwoods, and most recently, up and coming (and amazing!) alt-folk artists SHEL.

Mary and Bob now live rural southeast Indiana on land once owned by Bob’s great-great grandfather. From this inspiring location they continue to write and record their own material, and travel throughout the region to perform to an ever-growing group of faithful fans. 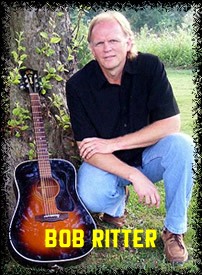 Bob was born in Indianapolis, Indiana. His mom, Lydia, was a musician/music teacher and his dad, Bill, was a basketball coach, so music and sports have been a huge influence on his life since the beginning.

His mom tells of hearing Bob sing harmony to commercials and TV show theme songs at a very early age. Bob played football and ran track/cross country in school, but his primary sport was basketball and his passion for the game led him to play on winning teams through high school and college, including the 1978-79 Indiana State University team which made it to the NCAA Championship game, pitting legends Larry Bird and Michigan State’s Magic Johnson against each other for the title.

While Bob participated in sports he also had a real passion for listening to music and singing along. At age 12 he got his first acoustic guitar, purchased by his mom with Top Value trading stamps.

After some lessons and a lot of practice, Bob explored and was influenced by different styles of music from the blues, rock and acoustic pop artists of the late 60’s and early 70’s. The gift of an electric guitar was like icing on the cake. “At that point, I was really into trying to play blues music from artists like Johnny and Edgar Winter and Jimi Hendrix. Later on, listening to artists like James Taylor, John Denver and Loggins & Messina brought me back to the acoustic guitar.

" I was also trying to develop a singing style and those artists seemed to fit my vocal range and temperament.” During this time very few outside of Bob’s immediate family had any knowledge of “Bob the musician”. It wasn't’t until he sang Dan Fogelberg’s “Longer” at his younger sister Julie’s wedding that his musical talent became known. “My only public performance prior to that was singing James Taylor’s “Fire And Rain” at a college dorm party which made me pretty nervous. At the wedding I was scared to death!” Scared as he was, singing at that wedding was a real confidence booster. His basketball days were over and music became the main focus of his life.

Bob soon joined “Casino”, the band of former guitar teacher, great friend and mentor, Craig Blattner. “I thought if I could ever play as good as Craig I would have really achieved something.” Being in the band was a great training ground for Bob. “We played all sorts of gigs and all styles of music, ranging from pop to disco to rock, and even a few cheesy ballads.”

While continuing to play in the band (and only playing electric guitar), Bob met singer/acoustic guitarist Bill Rumely while taking classes at IUPUI in Indianapolis. They teamed up for a handful of gigs, performing “unplugged” Led Zepplin, Bob Seger, Emerson, Lake & Palmer, Fogelberg, Neil Young and the like. “It was a fun crazy time, with a set list of about 50 songs and 5 hour gigs.

It was at this time I was really developing my own writing, and Dan Fogelberg influenced and inspired me like no other. Through him I found my musical direction. I still can’t believe he’s gone.” At the suggestion of a friend Bob later joined Brice Bowman and Peg Kunkel to form “Acoustic Avenue”, performing tight 3-part harmony covers by artists such as Fogelberg, Joni Mitchell, Simon & Garfunkel and others. Bob’s own Fogelberg/ Young/ Taylor influenced compositions began to make their way into the sets lists, with great audience response.

For years, Bob had been contemplating a move to Nashville, Tennessee, and in 1988 the time was right. After securing a job and settling in, he made his way to the singer/songwriter clubs for a taste of what Nashville was really all about. “It was intimidating and inspiring all at the same time. Hearing so many great musicians, singers and songs ultimately made me a better songwriter and musician.” (see Bomar & Ritter Bio) 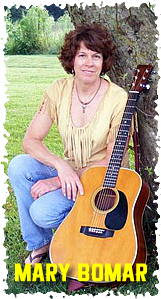 Mary was born in Altavista, Virginia and, with her family, moved to Cismont, east of Charlottesville, when she was eight months old. Her dad, “Blue” ran a Gulf station and her mom, Joan, pumped gas and kept the books. When Mary was in the first grade, her Aunt Emmy came to visit and brought an autoharp. “I remember being totally drawn to and fascinated by that instrument. My aunt let me try it out and I was completely consumed. I got an Oscar-Schmidt for Christmas that year.”

Family gatherings, school programs and playing while singing with her sisters, Jeanne and Janet, are where Mary’s love for musical performance began. There were even dreams of being on Ted Mac’s Amateur Hour. “I loved watching programs like The Ed Sullivan Show and imagining myself on stage.”

In the eighth grade, Mary tried out for band and became a snare drummer, playing drums and percussion all through high school. It was also the year she teamed up with two classmates to compete in the school talent show. Ed Berry played left-handed, upside down guitar while Nancy Sheffield and Mary sang. Ed showed Mary some chords on the guitar, and you can guess what she got for Christmas that year! “It was so easy to sit for hours and teach myself chords and then songs.

The years of playing autoharp, my love for all kinds of music, especially classical piano, singing and putting on shows with my sisters; my mom and her dad both playing piano, and my dad’s dad playing fiddle, all contributed to my musical ear, even if the technique was quite fine tuned. Sometimes I wish that I had played a band instrument where I had to learn the musical notes, but I would never trade what playing drums did for my rhythm.”

It was a friend who encouraged Mary’s first public performance at a Charlottesville restaurant, which invited musicians to “sing for your supper”. That’s exactly what she did, which led to more “play for food” gigs and eventually a successful audition with the popular local band, “Backstreet Mission”. Mary spent a couple years with the band, performing cover tunes by artists like The Eagles, Pure Prairie League, Gordon Lightfoot, Linda Ronstadt and others, with four and five part harmonies. “It was an amazing time and I learned how important rehearsal is for really tight, in tune harmonies. My sisters and I had the sibling harmony, but this was four or five completely different voices working together.”

Mary discovered Joni Mitchell when a neighbor loaned her the “Blue” album. That inspired her to begin writing her own songs. “I made the decision to leave the band and go solo because I wanted to perform originals. Eventually I joined up with Keith Winkler as a duo, then bass player Dave Pomery arrived on the scene, and the trio became known as “Watchtower”.” When Pomery moved to Europe, Mary did some more solo work, a short stint with “The Morgan White Band” and guitarist Aric Van Brocklin, and then moved to Nashville, Tennessee.

That move began a journey through the workings of the music business and the ups and downs of trying to make it in that world. A car wreck while visiting home in Virginia kept Mary away from Nashville for seven years. During that time she healed, wrote and performed songs but decided to give music a rest for a while. Various work opportunities led her to live in New Jersey, Italy, California, and Virginia, and eventually back to Nashville.

The return to Nashville was only a half-hearted return to the music business, but joining a church with an
excellent music program, working as a personal rep for a classical pianist, having two songs recorded
(“Living Water” and “Rockin’ Roly Poly”), Getting involved with The Country Music Foundation’s “Words And Music” program, and marrying musician/singer/songwriter Bob Ritter opened a new musical world for Mary. (see “Bomar & Ritter” Bio) 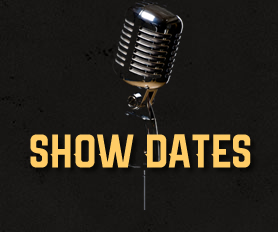 All dates have been postponed/canceled due to the ongoing pandemic. Mary and I deeply appreciate your interest and support of our music, and attending venues of our live performances. We hope and pray that you and your loved ones will be SAFE AND HEALTHY in the times ahead!